The BTE KOC Series Presented by David McMurtry Racing Engines is TWO WEEKS away from the Biggest Event the Series has promoted within 15 year History of the Series. The Turkey Beach Bash slated for Nov. 15-17 FEATURES 4 $10,000.00 to WIN RAces for $250. The event was capped at 282 + plus a 10% oversell that resulted in a sold out event.

“This is kind of big deal for the KOC Series and Gulfport Dragway,”  Gaylon Rolison stated. “The KOC Series has been laying the ground work for event like the Tureky Beach Bash. I feel over the years the KOC has really gained a lot of notority with the racers and sponsors by simply putting on consistent and transparent events year after year,” Rolison concluded.

Gulfport Dragway in Gulfport, MS is located on the MS Coastline that offers plenty of perks to the racers. Amazing local restaurants, numerous shopping attractions and Casinos minutes away from track truly makes BTE KOC Series Presented by David McMurtry Racing Engines a destination event for the racers.

Contact Gaylon Rolison at 228-323-7325 for any last minute entries that may become available. 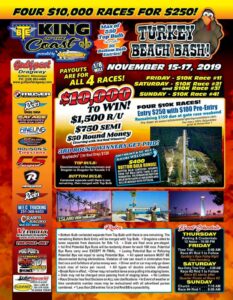